Do you have any questions or do you want to order? Just leave us a messeage: 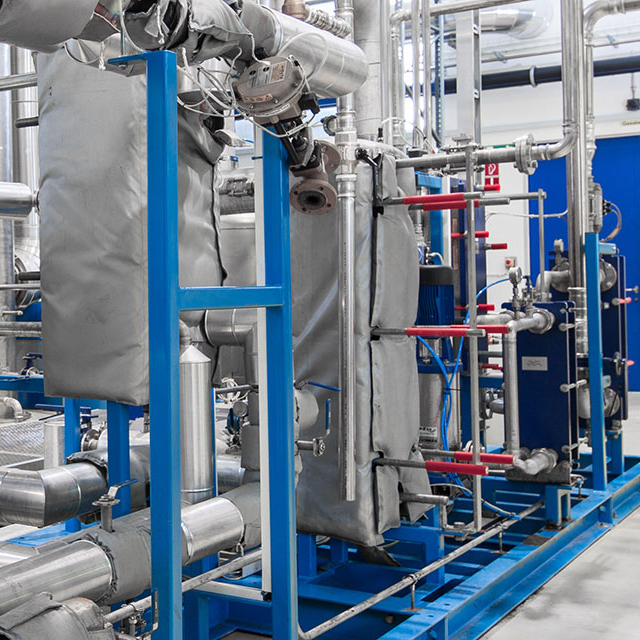 ASCO’s innovative ASCOSORB CO2 stack gas recovery technology turns your vent flue gas into a usable and profitable source of CO2. CO2 gas won by a CO2 Stack Gas Recovery System is a by-product of flue gas production from boilers as well as from other flue gas sources offering an economic CO2 source to any CO2 consumer or reseller. 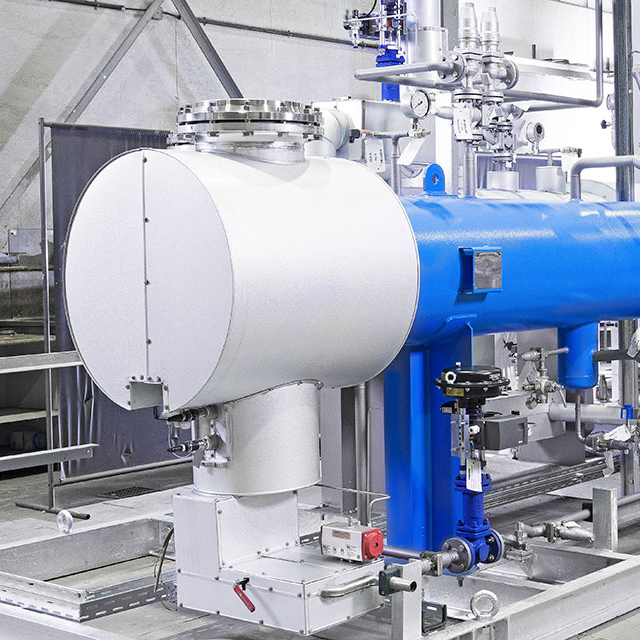 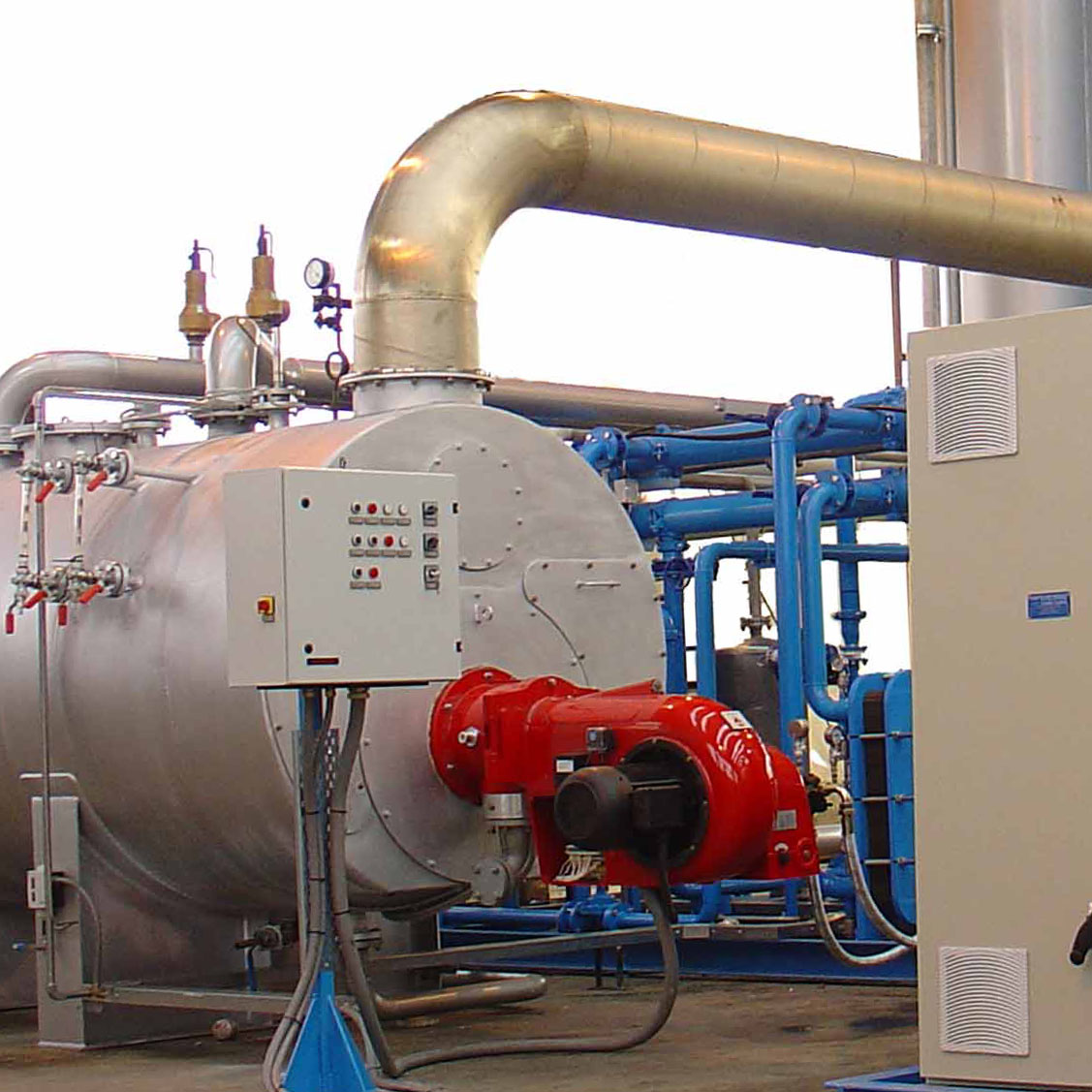 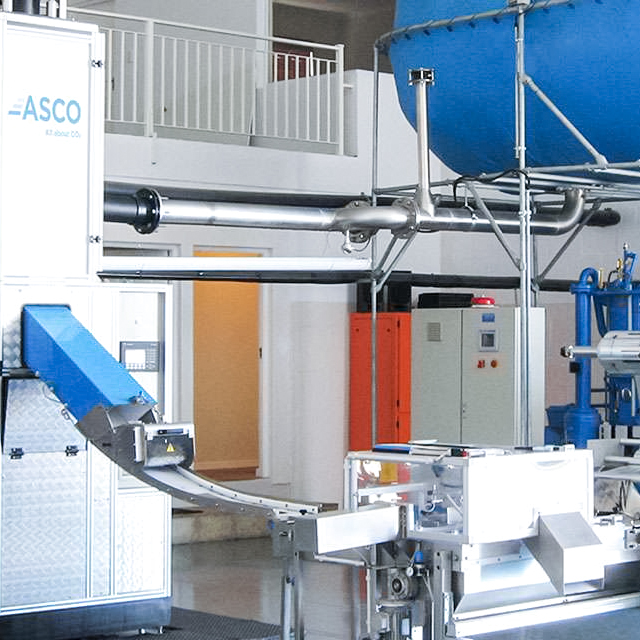 These Recovery Systems are engineered to efficiently recover revert CO2 gas from dry ice pellet and block machines which normally direct the revert (flash) gas to the atmosphere.

Carbon dioxide is the combination of two atoms of oxygen joined with a single carbon atom. Its chemical formula (CO2), is almost as well-known as that of water, H2O, and it is frequently referred to by its formula rather than its name.

In nature’s circle of life, the mutual dependence of plant and animal life is maintained through the link of carbon dioxide. Every time we breathe we release this gas, which plants need for life. The plants separate the carbon from the oxygen, through the process of photosynthesis. In turn, plants release the pure oxygen, which we need to survive. We reverse the process, and by combining the oxygen with carbon from the foods we eat, produce carbon dioxide again.

CO2 is a colourless, inert gas approximately 1 ½ times heavier than air. 0.03 % is present in the earth’s atmosphere. It is odorless, has a sweet biting taste (soda water) and is highly stable (difficult to separate). It is produced in varying amounts by the common process of combustion of fuels high in carbon content. The most common source of fuel for combustion is oil which, when mixed with the correct proportion of air, burns to produce around 15 % CO2 in the flue gases of CO2 plants. After combustion has taken place, the CO2 can be separated from the flue gases and made available for many commercial purposes, through a simple process.

CO2 can exist in three forms:
- in gaseous form: for the beverage and food industries
- in liquid form: in a storage tank under pressure
- in solid form: called dry ice (for cooling, blasting etc.)
All Production & Recovery Plants

ASCO CO2 Gas Recovery Systems can be applicable to a variety of sources.

other capacities on request.

Experience of many generations has contributed to ASCO's ability to offer complete solutions for CO2 projects. From complete CO2 production plants or CO2 recovery plants to CO2 storage, dry ice blasting, CO2 bottling, dry ice production and even dry ice packaging. ASCO has everything to make your CO2 project a success

ASCO is acknowledged as one of the leading companies when it comes to CO2-Products. Renown References are a proof of our high quality and reliability.

Many fields of application

Our production and recovery plants are used in many industries. In the beverage, gas, chemical and oil industries, but also in desalination and dry ice production.

ASCO not only has the right CO2 technology, but also supports you in optimally integrating and optimising CO2 production into the production process.

Liquid CO2 can be stored indefinitely at high pressure or Low pressure as follows:

High Pressure CO2
High pressure liquid CO2 is produced by compressing the gaseous CO2 in multistage compressors to pressures in the neighbourhood of 69 bar (1000,76 psi) pressure, then cooling it to around 18 °C (64,4 °F). It is customarily filled into specially constructed steel cylinders. Like water, liquid CO2 can be weighed, and this is the normal form of measuring it.

Low Pressure CO2
Low pressure liquid is an alternative method of storing CO2 and is produced either by expanding high pressure CO2 to a lower pressure or by refrigeration. It is held in specially constructed storage tanks, heavily insulated and equipped with refrigeration units to hold the internal tank pressure at or below 21 bar (304,58 psi) and -18 °C (-0.4 °F) temperature. Pressure switches are incorporated to control the refrigeration units and safety mechanism and electrical alarms are fitted to release the tank pressure and raise an alarm in the event of refrigeration malfunction.
Low pressure liquid CO2 (sometimes referred to as “bulk”) is transported to one place from another in insulated road tankers or trailers (or, in some countries, by rail tank wagons), the liquid being simply transferred from mobile to static tank by pumping or gravity feed.
Unlike water, carbon dioxide cannot exist in the open air in liquid form. It must be held under pressure or refrigeration (or a combination of both) to remain in the liquid state.

Dry Ice is the product of processing liquid CO2 . If the pressure of liquid CO2 is suddenly released, a proportion of that liquid will change to the solid state (becoming dry ice “snow”) and the remainder will revert to gas (revert gas). When the snow is compressed under hydraulic or mechanical action, blocks or pellets of dry ice are formed. The revert gas (gaseous CO2 ) can be readily reclaimed and converted back to liquid by recompression and reliquefaction, thence returned to the dry ice block machine or pelletizer for further processing.
The temperature of dry ice is -79 °C (110,2 °F) and in the atmoshere it will pass directly from the solid to the gaseous stage, leaving no moisture or trace of its presence except the cold.

CO2 is derived from a number of sources including combustion of carbonaceous fuels, fermentation, natural wells, and as a by-product of industrial processes such as ethylene oxide and bioethanol production and ammonia synthesis.
A recovery-plant (RRS) the reduces the amount of LCO (Liquid CO2), that is needed during dry ice production by around 50%. Especially in countries with a higher prices for LCO this is a huge economic advantage.
By capturing the gaseous CO2 produced during dry ice production and halving the consumption of LCO2, economic savings and emissions are achieved. The conversion rate from liquid CO2 to dry ice is significantly higher and the loss of unused CO2 is minimized.